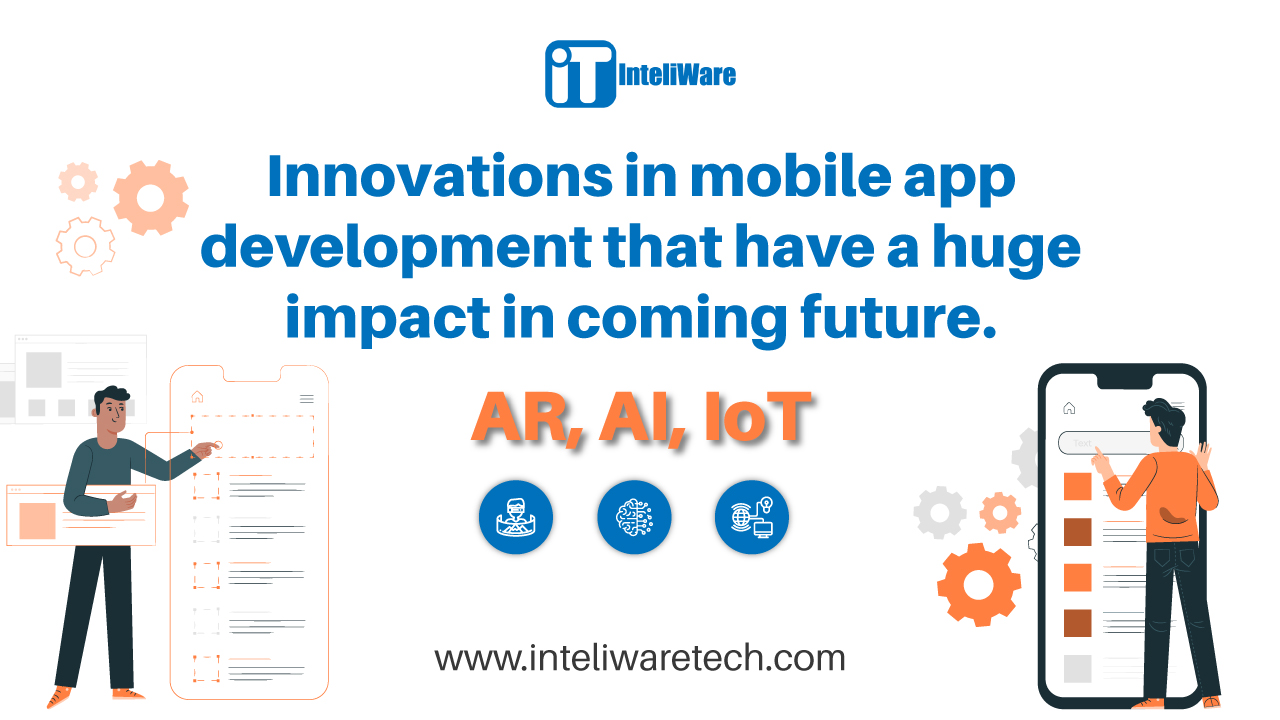 Innovations in mobile app development that have a huge impact in the future. AR, AI, IoT.

Users may implement on-demand app development to get the services they need whenever they want. Those on-delivery services connect buyers and sellers on mobile app, similar to how Netflix connects people who want to watch movies and TV shows online, FoodPanda connects people who want to order food online, and easy paisa connects people who want to send and receive money. The new innovation is to provide the on-demand market's most basic requirement, which is a quick satisfaction. To their credit, both new and existing organizations are focusing on the long-term benefits of on-demand app development. The market is expanding, demand is rising, and with over 3 billion smartphone users worldwide, on-demand services are becoming more popular. According to data, customers in the United States spend roughly $57.6 billion on the on-demand economy, with revenue expected to reach $335 billion by 2025

On-Demand apps i.e taxi app. Careem, the world's largest on-demand app transportation network provider, is based in Dubai and operates in over 100 locations across 14 Middle Eastern, African, and South Asian nations. This taxi app was recently obtained by Careem for $3.1 billion, pricing it at over $2 billion. As part of the agreement, this on-demand app will preserve its own name and operate independently. Careem has received a total of $771.7 million in investment. link the best taxi on-demand apps for smartphones Careem is a hassle-free transportation app that makes it easier for passengers to go from one place to another, whether they are commuting to work, going to the airport, or visiting relatives for a get-together. This on-demand app taxi solution, which comes with several features, is a must-have for Dubai residents who don't want to deal with traffic.

Artificial Intelligence (AI) and Machine Learning (ML) have recently become popular topics in the computer market. Artificial Intelligence (AI) is having a greater influence on the economic sector than it is on our daily lives. In 2014, around $300 million in venture capital was invested in AI firms, a 300 percent increase over the previous year. Artificial intelligence allowed users to turn photographs into realistic animations. When combined with Deep Learning, machine learning may enable the development of mobile applications by providing real-time analytics and other useful information. As technology progresses, developers will be more motivated to use Artificial intelligence and machine learning in mobile app development due to their ease and versatility.

Augment and virtual reality of things

Since the mid-1400s, "virtual" has meant "being something in essence or effect, but not literally or in actuality. Since 1959, the word "virtual" has been used in the computer context to mean "not physically existent but made to seem by software. According to Smart Insights, virtual reality technology is bringing the actual and digital worlds closer together. Augmented reality headset sales are estimated to exceed 161.1 billion by 2025, with headset prices continuing to decline as a result of this expansion. This implies that as virtual reality becomes more popular, digital marketers will discover new ways to exploit the technology. This is a great time for your brand to consider the technology as part of Experiential or Event Marketing activation. Creating a fun and unique brand-related experience with a virtual reality game at your trade show display is an excellent approach to draw attention and a large number of new consumers to your business. Create a unique virtual reality experience that they will want to share on social and digital platforms, and your virtual reality content will go viral! Using Augmented reality to differentiate your brand from the competition will provide you a significant competitive edge. By embracing the platform early, you will have the opportunity to test and experiment before the technology becomes popular. When it does, you'll be at the front of the line.

Avatars are 3-dimensional representations of players in games. Users create personalized avatars in the metaverse, which can have any physical attributes and personalities they wish. Your avatar can communicate with other players and the platform.Transitioning between different components with ease, Many of the many components that could make up a metaverse exist now (such as virtual shopping, games, casinos, and concerts), but we don't have a platform that connects them all and allows us to move throughout the entire "world" with the same avatar.

Beacons and internet Of things

Beacons, in brief, are customized computer systems designed to do specific particular tasks. In general, they are approach transmitters, which are generally the size of a conventional computer. They employ Bluetooth wireless technology to link different devices, either within the beacon network or external IoT devices. Beacons and beacon technology have been around for a while, and we've seen a significant impact on the Internet of Things (IoT) and modern marketing models. In this article, we will define beacon technology, discuss its role in IoT, and discuss how it can shape the future of smart homes and offices. It's also worth noting that, in the case of beacons, the technology that powers them is already in use in a variety of businesses. They are essentially science fantasy elements that have come to reality. Given how easy beacons are to operate, it's just a matter of time before they're in the hands of the great majority of families.

We can acquire up-to-date news from all around the world in the blink of an eye thanks to the internet. Users can enjoy location-based storytelling with the help of beacons technology and internet of things. Underworld, an England business, uses Google Address beacons to offer local news to pedestrians' smartphones. This assists in attracting tourists and in informing Manchester residents about the most recent news, events, offers, and facts about the city. The tale fades from the device screen when a pedestrian leaves the beacon's range. For visitors to The Walk of Honor in Australia, a comparable app is already in us

Food, grocery, and entertainment will undergo a new revolution and innovation as customers are compelled to purchase their daily requirements online android app and consume an increasing amount of entertainment material via mobile applications. Online grocery and food anroid applications were the fastest-growing areas in the United States in 2021, with download and use increasing by up to 40%. Simultaneously, gaming applications saw a 140 percent increase in usage and downloads. Netflix, Disney, Prime, and other streaming applications are claiming record-breaking amounts of new users, subscriptions, and use. For example ,the Supermarket app, in this Grocery shopping is nothing more than a Big Adventure. Your objective is to complete everything on your to-do list. Allow the children to assist with the main list or, if they are old enough, divide the items into individual lists and see who can complete their list first! To add a twist, make your treasure hunt list out of coupons that would otherwise be thrown away. When you've located each item, leave the coupon with someone who will be able to utilize it. You'll have a lovely time while also doing a good deed!.

Among the various sorts of applications in the market, business-to-business (B2B) apps have emerged as one of the most interesting. According to Gartner, a research and consultancy business located in the United States, B2B eCommerce transactions in the United States would reach $1.8 trillion by 2023, accounting for 17 percent of all B2B sales in the country. With mobile app development becoming more simplified year after year, it is projected that more than 65 percent of organizations have a strategy to establish their own mobile applications. A B2B app for mobile devices is known for optimizing the real-time purchases of real-time customers. Additionally, the business operations can be improved significantly by leveraging the real-time data collected from B2B apps, a powerful medium to unearth data-driven insights regarding partners, clients, and employees.

voice text app is a good example of B2B mobile app, If you're driving or can't text on your phone at a certain time, having voice recording software on your phone might be quite useful. Voice Text can convert your voice to text or email, which you may then send to social media sites like Facebook and Twitter. You can also paste your text into any other application using the clipboard. The software supports 23 different languages, and it has a variety of editing tools.

Swift is a fast iOS programming language. Apple released a new, modern, and considerably more straightforward API for implementing multitasking in android applications.. They are known as 'callback APIs.' They make it possible to develop safer and easier-to-follow concurrent code, which is a significant advance over older, difficult-to-use APIs. Apple has increased developers' capacity to work concurrently with these 'requests APIs,' and their apparent efficacy indicates that they are likely to become the standard in the coming years. There have also been encouraging tendencies in Apple's Swift UI. Legacy initiatives are becoming increasingly integrated in mobile applications. And new projects are almost always written in Swift UI.

Taking over Swift, the world's most popular social media collaboration platform no longer requires a demonstration of its popularity and reliability. You have it all: connecting with friends, relatives, and individuals who have the same interests, speaking privately, reading your chosen material, buying and selling products, and simply being a part of your community. Facebook's interest in Swift appears to be entirely technical in nature. Swift has the advantage of being a direct access language as well as a server-side language. This is helpful for a product like Facebook; apps and servers can communicate smoothly with one another, potentially giving a corporation more freedom in writing APIs for services.

The development of 5G

5G is a more capable, integrated air interface. It has been built with the capability of enabling next-generation user experiences, powering new installation patterns, and delivering new services. With its high speeds, superior reliability, and fast data, 5G will take the mobile ecosystem to new heights. 5G will have an influence on every business, making safer transportation, remote healthcare, precise agricultural and computerized logistics a reality, among other things. 5G can enable new services that can transform industries with ultra-reliable, available, low-latency links like remote control of critical infrastructure, vehicles, and medical procedures 5G is designed to instantly link a vast number of embedded sensors in nearly everything by scaling down data speeds, power, and mobility—providing very flexible and low-cost connection options.

Remote diagnostics and procedures, as well as e-health and responsive devices, will be available in the health business, and Artificial intelligence assistants may be able to assist those with impairments. Companies like Immersive Rehab, which specializes in interactive treatment, are already looking at how 5G may improve their services, and 5G is being deployed in numerous experiments like the Liverpool 5G Testbed. 5G has already made its way into the operating room, with Telefónica presenting the first surgical aid system based completely on 5G technology with the cooperation of a Malaga hospital.